The achievement comes after ECU became the first WA university to pledge to reduce plastic waste by eliminating single-use plastic water bottles and straws from its campuses and events in 2018.

The University cemented its ongoing commitment by increasing the number of free and accessible water refill stations across its three campuses at ECU Joondalup, Mount Lawley and South West (Bunbury).

As part of the project, the University has tracked the water use of 29 water refill stations located in high-traffic areas for the past three and a half years.

“Since June 2019, ECU’s on-campus water refill stations and drinking fountains have delivered more than 485,907 litres of water to the ECU community, which is equivalent to 1,295,754 single-use 375ml plastic bottles.

All food, beverage and vending operators based at ECU have thrown their support behind the campaign by offering alternative options for the sale and supply of water, such as recyclable glass bottles, cartons or jugs.

ECU began phasing out single-use plastic water bottles in Semester 2, 2018 as a joint initiative with the ECU Student Guild.

“ECU students understand how plastic pollution is a broad systemic challenge that requires smart policy change to make a real impact. That’s why we're proud to be a part of a University that took the initiative to be leaders in this space,” Mr Reynolds said.

“Personally, as an Environmental Science student and an avid beachgoer, being a part of a University that takes its responsibility to protect the environment seriously is empowering to see.

“This program goes above and beyond putting ECU values into action by not only banning single-use plastic bottles on campus, but by supporting the transition through equitable access to free water for students.

“ECU has shown the University is always willing to come to the table and make real changes on environmental and sustainability issues and the ECU Student Guild will continue to inform and provide a platform for student voices.”

Professor Chapman said the project is an example of making a real-world impact in education.

“We are empowering our students and staff – both within and outside of the classroom – to become the future leaders of a more sustainable and environmentally conscious world,” Professor Chapman said.

“It’s also financially responsible; more than 90 per cent of the cost of bottled water can be traced back to the bottle, lid and label.

Taking the next step with Containers for Change

Every eligible plastic, glass bottle, can or drink container donated as part of the state-wide container deposit scheme will help raise funds for the ECU Student Hardship Fund and Scouts Australia. 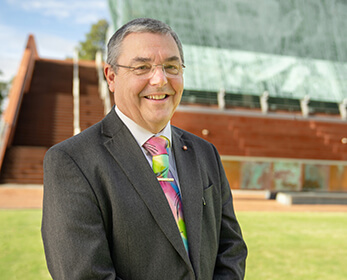 Learn with leaders at ECU